In this blog, we would like to introduce basic concepts in causal inference and the potential outcome framework.

For example, consider the case of a single unit, I, at a particular point in time, contemplating whether or not to take an aspirin for my headache. That is, there are two treatment levels, taking an aspirin, and not taking aspirin. There are therefore two potential outcomes, Y(Aspirin) and Y(No Aspirin), one for each level of the treatment.

The potential outcome framework, formalized for randomized experiments by Neyman (1923) and developed for observational settings by Rubin (1974), defines for all individuals such potential outcomes, only some of which are subsequently observed. This framework dominates applications in epidemiology, medical statistics, and economics, stating the conditions under causal effects can be estimated in rigorous mathematical language

The potential outcomes approach was designed to quantify the magnitude of the causal effect of a factor on an outcome, NOT to determine whether it is a cause or not. Its goal is to estimate the effects of “cause”, not causes of an effect. Quantitative counterfactual inference helps us predict what would happen under different circumstances, but is agnostic in saying which is a cause or not.

The potential outcome is the value corresponding to the various levels of treatment: Suppose we have a ‘treatment’ variable X with two levels: 1 (treat) and 0 (not treat) and an outcome variable Y with two levels: 1 (death) and 0 (survival). If we expose a subject, we observe Y1 but we do not observe Y0. Indeed, Y0 is the value we would have observed if the subject had been exposed. The unobserved variable is called a counterfactual. The variables (Y0, Y1) are also called potential outcomes. We have enlarged our set of variables from (X, Y) to (X, Y, Y0, Y1). A small dataset might look like this 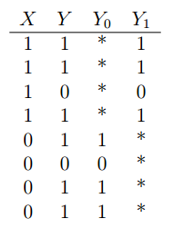 Potential outcomes and assignments jointly determine the values of the observed and missing outcomes:

Since it is impossible to observe the counterfactual for a given individual or set of individuals. Instead, evaluators must compare outcomes for two otherwise similar sets of beneficiaries who are and are not exposed to the intervention, with the latter group representing the counterfactual

In an observational study, the treated and untreated groups will not be comparable. Maybe the healthy people chose to take the treatment and the unhealthy people didn’t. In other words, X is not independent. The treatment may have no effect but we would still see a strong association between Y and X. In other words, a (correlation) may be large even though q (causation) = 0.

Here is a simplified example. Suppose X denotes whether someone takes vitamins and Y is some binary health outcome (with Y = 1 meaning “healthy”)

The observed data are:

To account for the differences in the groups, we can measure confounding variables. These are the variables that affect both X and Y. These variables explain why the two groups of people are different. In other words, these variables account for the dependence between X and  Y. By definition, there are no such variables in a randomized experiment. The hope is that if we measure enough confounding variables then, perhaps the treated and untreated groups will be comparable, condition on Z. This means that  is independent of  conditional on Z.

The mean treatment effect or mean causal effect is defined by

The estimator for parameter: Estimator = difference-in-means

We are looking for Data Scientist and Engineer.
Please check our Career Page.

Healthcare analytics is the collection and analysis of data in the healthcare field to study determinants of disease in human populations, identify and mitigate risk by predicting outcomes. This post introduces  some common epidemiological study designs and an overview of the modern healthcare data analytics process.

Clinical medicine relies on evidence base found in strong research to inform best practices and improve clinical care. The gold standard for study design to provide evidence is Randomized control (RCT). The main idea of this kind of research is to prove the root cause that makes a certain disease happen or the causal effect of a treatment. RCTs are performed in fairly homogeneous patient populations when participants are allocated by chance to two similar groups. The researchers then try different interventions or treatments for these two groups and compare the outcomes.

In ideal conditions, there are no confounding variables in a randomized experiment, thus RCTs are often designed to investigate the causal relationship between exposure and outcome. However, RCTs have several limitations, RCTs are often costly, time-intensive, labor-intensive, slow, and can consist of homogeneous patients that are seldom generalizable to every patient population.

Unlike RCTs, Observational studies have no active interventions which mean the researchers do not interfere with their participants. In contrast with interventional studies, observation studies are usually performed in heterogeneous patient populations. In these studies, researchers often define an outcome of interest (e.g a disease) and use data collected on patients such as demographic, labs, vital signs, and disease states to explore the relationship between exposures and outcome, determine which factors contributed to the outcome and attempt to draw inferences about the effects of different exposures on the outcome. Findings from observational studies can subsequently be developed and tested with the use of RCTs in targeted patient populations.

A prospective study is a study in which a group of disease-free individuals is identified as a baseline and are followed over some time until some of them develop the disease. The development of disease over time is then related to other variables measured at baseline, generally called exposure variables. The study population in a prospective study is often called a cohort.

A retrospective study is a study in which two groups of individuals are initially identified: (1) a group that has the disease under study (the cases) and (2) a group that does not have the disease under study (the controls). Cases are individuals who have a specific disease investigated in the research. Controls are those who did not have the disease of interest in the research. Usually, a retrospective history of health habits before getting the disease is obtained. An attempt is then made to relate their prior health habits to their current disease status. This type of study is also sometimes called a case-control study.

A cross-sectional study is one in which a study population is ascertained at a single point in time. This type of study is sometimes called a prevalence study because the prevalence of disease at one point in time is compared between exposed and unexposed individuals. . Prevalence of a disease is obtained by dividing the number of people who currently have the disease by the number of people in the study population.

Often more than one investigation is performed to study a particular research question, by different research groups reporting significant differences for a particular finding and other research groups reporting no significant differences. Therefore, in meta-analysis researchers collect and synthesize findings from many existing studies and provides a clear picture of factors associated with the development of a certain disease. These results may be utilized for ranking and prioritizing risk factors in other researches.

In primary research infrastructure, designing a large-scale randomized controlled trial (RCTs) is expensive and sometimes unfeasible.  The alternative approach for expansive data is to utilize electronic health records (EHR). In contrast with the primary analysis, secondary analysis performs retrospective research using data collected for purposes other than research such as Electronic Health Record (EHR). Modern healthcare data analytic projects apply advanced data analysis methods, such as machine learning, and perform integrative analysis to leverage a wealth of deep clinical and administrative data with longitudinal history from EHR to get a more comprehensive understanding of the patient’s condition.

EHRs are data generated during routine patient care. Electronic health records contain large amounts of longitudinal data and a wealth of detailed clinical information. Thus, the data, if properly analyzed and meaningfully interpreted, could vastly improve our conception and development of best practices. Common data in EHR are listed as the following:

In the secondary analysis, the process of analyzing data often includes steps:

We are looking for Data Scientist and Engineers.
Please check our Career Page.