In computer science, most of algorithms run to completion: they provide a single answer after performing some fixed amount of computation. But nowadays, in machine learning generation, the models take long time to train and predict the result, the user may wish to terminate the algorithm prior to completion. That’s where anytime algorithm came in, an algorithm that can return a valid solution even if it is interrupted before it ends. The longer it keeps running, the better solution the user get.

What makes anytime algorithms unique is their ability to return many possible outcomes for any given input. An anytime algorithm uses many well defined quality measures to monitor progress in problem solving and distributed computing resources. While this may sound like dynamic programming, the difference is that it is fine-tuned through random adjustments, rather than sequential. Initialize: While some algorithms start with immediate guesses, anytime algorithm take more calculated approach and have a start – up period before making any guesses

Growth direction: How the quality of the program’s “output” or result, varies as run time

Growth rate: Amount of increase with each step. Does it change constantly or unpredictably

In clustering, we must compute distance or similarity between pairs of time series and we also have a lot of measurements. As many researches proved that dynamic time warping (DTW) is more robust than others, but the complexity O(N2) of DTW make computation more trouble.

With anytime algorithm, the life is easier than ever. Below is pseudocode for anytime clustering algorithm.

Firstly, we need to approximate the distance matrix of dataset.

Secondly, we do cluster to get the very basic result.

Thirdly, we make some heuristic to find the optimal solution to update the distance matrix, after each updating, we get a better result than before.

Lastly, if the algorithm keeps running longer, it will finish the task and we can get the final optimal output. 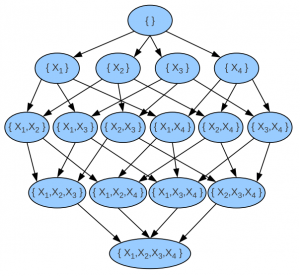 Weighted A* algorithm use this cost function to minimize